Kadampa Buddhism is a school of Mahayana Buddhism that was founded by the great Indian Buddhist teacher Atisha (982-1054). "Ka" refers to the teachings of Buddha and "dam" to the special instructions of the Lamrim, known as "the stages of the path to enlightenment."

Kadampas learn to use the Buddha's teachings as practical methods to transform all of their daily activities on the path to enlightenment. The Kadampa tradition was later promoted throughout Tibet by Je Tsongkhapa and his followers, known as the new Kadampas, who were not only great scholars but also spiritual practitioners of immense purity and sincerity.

Shakyamuni Buddha is the founder of Buddhism who demonstrated the attainment of full enlightenment and how to awaken from the sleep of ignorance and cyclical rebirth (samsara). The Buddha transmitted the teachings, or Dharma, in an unbroken lineage through the Kadampa masters Atisha and Je Tsongkhapa.

The great Indian Buddhist teacher Atisha (982-1054 AD) reintroduced pure Buddhism to Tibet. He was asked to present a Dharma that everyone could follow and to show how all the paths of sutra and tantra could be practiced together. Atisha composed 'The Lamp of the Path to Enlightenment', the first written Lamrim text which served as the basis for all subsequent Lamrim instructions.

Je Tsongkhapa was a great 14th-century Tibetan Buddhist teacher who spread and developed Kadampa Buddhism that Atisha had introduced three centuries earlier. His disciples became known as the 'new Kadampas', and to this day 'new Kadampas' all over the world study his teachings and seek to follow his pure example.

Buddha Shakyamuni is the founder of Buddhism who demonstrated the attainment of full enlightenment and how to awaken from the sleep of ignorance and cyclic rebirth. He then passed the teachings, or dharma, in an unbroken lineage through the ancient Kadampa teachers Atisha and Je Tsongkhapa.

The great Indian Buddhist Master Atisha (982-1054 AD) was responsible for reintroducing pure Buddhism into Tibet. He was asked to present a Dharma that everybody could follow and show how all paths of Sutra and Tantra could be practiced together. Atisha wrote Lamp for the Path, the original Lamrim text that served as the basis for all subsequent Lamrim instructions.

Je Tsongkhapa was a great 14th century Tibetan Buddhist Master who promoted and developed the Kadampa Buddhism that Atisha had introduced three centuries earlier. His followers became known as the 'New Kadampas', and to this day New Kadampas worldwide study his teachings and strive to emulate his pure example.

Beginning with Je Tsongkhapa, the lineage of the 'new Kadampas' flourished throughout the centuries, right up to the present day. In recent years, it has been spread throughout the world by the contemporary Buddhist teacher Venerable Geshe Kelsang Gyatso Rinpoche, the founder of the New Kadampa Tradition – International Kadampa Buddhist Union (NKT-IKBU).

Venerable Geshe Kelsang Gyatso is a fully realized meditation master, a renowned teacher of Buddhism, and the founder of the New Kadampa Tradition (NKT-IKBU).

Geshela, as he is affectionately called by his students, is responsible for the worldwide spread of Kadampa Buddhism today.

From the age of eight Geshe-la studied extensively in the great monastic universities of Tibet and obtained the title of Geshe, which means spiritual friend. Under the direction of his Spiritual Guide, Trijang Rinpoche, he spent eighteen years doing meditation retreats at the foot of the Himalayas.

He has published a series of books exceptional books on Buddhism and meditation, from basic introductions to advanced texts on Buddhist philosophy.

Geshela has designed three special study programs and has established centers and groups in various cities around the world. It has trained hundreds of qualified teachers and created a thriving community of monks and nuns.

He has also designed a project to build buddhist temples in the most important cities of the world.

In his teachings, Geshe Kelsang reveals practical methods for gaining wisdom, cultivating a good heart and maintaining a peaceful mind, and as a result finding true and lasting happiness. He himself shows these qualities in an exemplary way with his own actions and has dedicated his entire life to helping others find their happiness and inner peace. 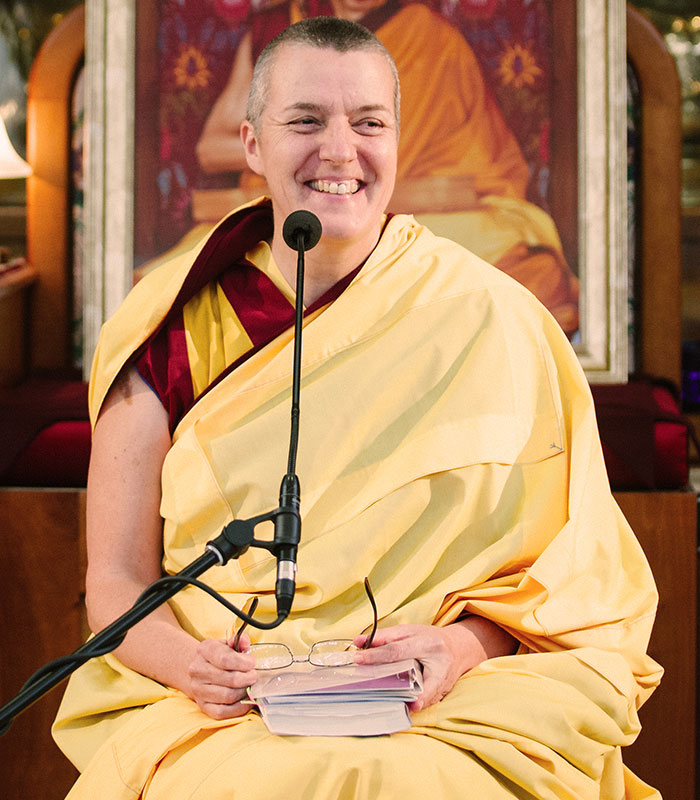 Gen-la Dekyong has been a student of Venerable Geshe Kelsang Gyatso Rinpoche for over
thirty-five years and has been formed with sincerity
under his guidance in all aspects of the Dharma kadam. Genla is recognized as a teacher
of fully qualified Dharma from both sutra
like tantra.

“Happiness and suffering are states of mind, and therefore their root causes do not exist outside of the mind itself. If we want to be truly happy and free from suffering, we must learn to control our mind.”
— VENERABLE GUeshe Kelsang Gyatso RIMPOCHE —
DOWNLOAD YOUR FREE EBOOK >>

How to transform your life

How to transform your life